Page Content
Late in the decade of the 1960s as America was fascinated by manned space flight and the race to the moon, another innovation was quietly being developed in Columbus, Ohio. Following the lead of a cardiologist, Dr. Frank Pantridge of Belfast, Northern Ireland, a small group of physicians, lead by Dr. James V. Warren, began to provide advanced prehospital care as never done before. Warren's Heartmobile project provided significant stimulus for development of the prehospital advanced medical care now provided by EMS in America. 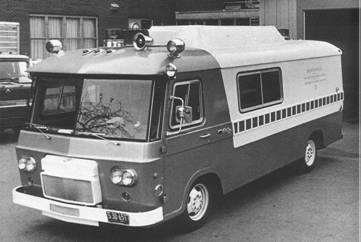 The Heartmobile 1969
Warren began discussions about mobile coronary care with the Columbus Division of Fire in 1966. With the help of Dave Ellies, a local industrialist, the Advanced Coronary Treatment Foundation, the Central Ohio Chapter of the American Heart Association and the Ohio Regional Medical Program a coalition was formed.

By April of 1969, the Heartmobile program had been grafted into the existing Columbus Division of Fire's emergency medical care system. It operated as a joint effort between the Columbus Division of Fire and the Ohio State University Medical Center (OSUMC). Specifically designed to transport the care and facilities of the Coronary Care Unit directly to the patient, the Heartmobile was the first vehicle of it's kind in the United States.

The Heart Shack
Initially, the Heartmobile was located in a small temporary building that was erected on the campus of the OSUMC directly adjacent to the Emergency Department. This building later became known as the "Heart Shack." When a call for assistance was thought to be cardiac in nature, a physician was paged and responded from the 11th floor Coronary Care Unit. Three firefighters and the physician would then respond in the Heartmobile.

By 1971 it was apparent to Warren and his team that firefighters could be trained to operate without physician presence. On July 1, 1971, the Columbus Division of Fire took over Heartmobile operations. Firefighters began treating patients at emergency scenes without direct physician supervision. A new class of health care provider was born: the paramedic.

Today, the Central Ohio Fire Museum is restoring the Heartmobile.